OK, not entirely shameless. I'm pretty proud of this current endeavor I get to be a part of.

My good friends at Friends of Big Bone are launching a social media campaign to precede a fundraiser for their visitor center. The goal is to raise $70,000 by the end of the year. The first fund raising campaign will target $20,000 to complete phase 01 of the project, and will launch on April 1st. We are still narrowing down the crowd funding platform, but I'll update that when we've secured it. If you want to be one of the cool kids and donate before the launch date, you can do so here. The funds will go to update the visitor's center at Big Bone Lick State Park.

New displays, wall murals, and lots of other great improvements to the facility.

Big Bone Lick is an amazing park, and I'm not just saying that. I love going for hikes in the woods and once the snow is gone, I'll be making a lot more trips out there. This is a great area to visit and has a lot of history that goes all the way back to the last ice age. If you've never been, check it out! I'm a fan of palaeontology and they have found lots of bones in the park. A giant ground sloth was just one of many specimens that have been discovered there. They also have a live bison herd on the grounds. Come spring time, there should be a new calf or two walking around.

Why am I sharing all of this? Well, I'm working on the social media side and I can't help but gush about it. For the campaign, I created Harlan, full name Harlan G. Sloth, a giant ground sloth character that will be the figure head of the project. He has his own Twitter, Facebook, and Instagram accounts. Not only did I create the character, I made a puppet. Yes, of all the weird and fun things I've made in correspondence to my career, this is the first time I've made a puppet mascot. See how awesome he is below! He's also got business cards. While he's traveling around, I'll hand out his cards so more people can follow the quickest giant ground sloth on Earth. Or really, the only giant ground sloth on Earth. He just woke up from a 10,000 year nap and just realized he's the only one left. Kind of a bummer, but he's up for exploring and making new friends.

I hope I've peaked your interests and you swing by Harlan's accounts to see what fun things he's doing! Share with everyone you know! He'll be traveling around the tri-state area, but mostly northern Kentucky and Cincinnati. If you run into him, nap a photo and tag him. If there's a place you think Harlan should check out, let me know!
Harlan and all his giant ground sloth glory. 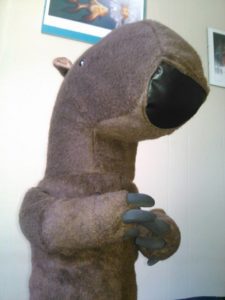 Things For Women Are B.S.